Jonathan started boating around 16 years ago and gained confidence and experience through cruising in company with CQBHA.  With guidance from members and training with CQBHA and through the RYA Yachtmaster course he widened his cruising area.  With the Association and others he has cruised to Caen, Torquay, Guernsey and Jersey, St Malo and Dinan and Perros Guirec amongst other destinations in the UK and France.  He is proud to represent the Cobb’s Quay Bertholder’s interests with MDL and others including the Bridges Operating Board etc.

Kevin started boating through canoeing, windsurfing, yacht crewing and then onto two ski boats, a Fairline Sprint, and a Sealine 290 before moving to his present vessel a Princess 38 Flybridge. He joined the association in 1996 to widen his cruising grounds with his then small children, who have both grown up at the marina. Kevin is a long serving member of the committee joining in 2000 and in 2001 he began to assist with the cruising role which he did, with a years break in between, for the past 16 years. Now retired from the cruising role he looks forward to supporting the membership and Committee in the future, with its ever-changing role. His aim has always been to help others make that daunting journey a “Reality”. Kevin is always happy to talk about the Association, cruising or give advice. He can be found on “Reality” D36 most weekends.

Carol has been the CQBHA Secretary since April 2006, but a berth holder at Cobbs Quay since 1995. She has a long history of boating – starting with sailing yachts. Her experience of motorboats began in 1987 with a small Fletcher Cruisette, kept on a trailer and launched at Mitchells Boat Yard. The boats have gradually got bigger and she is now crew on ‘Solaris’  – a Sealine S34 berthed on C35. With partner Ivor, she has participated in many CQBHA cruises – including their first Channel Crossing over 10 years ago.

Like many, Gavin’s interest in boating started by messing about in dinghies as a child. Returning to this interest about 20 years ago, he and his wife first bought a small sports boat and have stayed with that boat format over the years, currently owning their Windy Khamsin, on C44. A cruise with MBM magazine many years ago gave them the confidence to start to cruise independently and they continue to do so having visited the West Country in the Uk numerous times. These days they are more likely to be found in France where over the last decade they have cruised extensively between east Normandy and mid Biscay.

Val has been at Cobb’s Quay since 1998 and is now on their fifth Sealine. You can find her on Spindrift, C34. 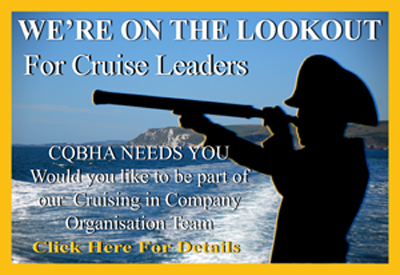 If any member would like to help with this role we would be very grateful if you could contact the Chairman of CQBHA at chairman@cqbha.org

Peter, a marine artist, and his wife Anne, an accomplished marine photographer, have lived in Poole all their lives and have never been far away from the sea. In 1976 Peter took up scuba diving and skippered inflatable dive boats and steel work boats up to 75ft for over 20 years. He started sailing in 1984 and moved into powerboats and Cobb’s Quay in 1996 with a Mariah 18ft bowrider. Later Peter and Anne bought a Mariah 25ft Cuddy and went on CQBHA cruises to the Solent and Weymouth but found the seas a bit challenging at times and,15 years ago moved on to a Bavaria 29. Since then they have regularly cruised across the channel and the south coast of England. In the 2018 Peter & Anne bought a Westerly Centaur and now enjoy sailing as well as power boating. Peter runs the CQBHA website and for a number of years published the CQBHA Horizons Magazine. Peter would love to hear from members with interesting articles or information for the website and can be found most weekends on his boat ‘Work of Art’, berth C24.

Jim spent many years trailing boats from his Hertfordshire home before a ‘lifestyle’ relocation to Poole late 2006 and berthing at Cobbs Quay, whilst upgrading to a Bayliner Trophy sports/day boat berthed on F163. As a keen fisherman he’s frequently out in Poole Bay chasing specimens or just chilling in the harbour with his family, or cleaning his boat! Joining the committee soon after arriving at the marina he assumes responsibility for writing and issuing the association’s newsletter, in addition to interacting with our Pontoon Representatives.

Emma has grown up at  the marina with her dad Kevin and mum Linda on Reality. She has met and continues to meet new friends through her boating and jet ski riding and has now taken on the role of members representative for the dry-stack.  Emma also runs the CQBHA Facebook pages & photo-blog and can be found around the marina or on “Reality” D36. She hopes to help the next generation enjoy the marina as much as she has and to enjoy boating and water sports in company and safety

Clive is a founder member of the Association. His boat Girl Fisher can be found at the head of F pontoon. Over many years he has continued to support the Association including accompanying our cruises across the Channel acting, as Clive would say, mother ship. Clive operates the local Sea Start vessel and is the guy you want to know when and if you have a problem. If he can ’t fix you, he knows someone who can!