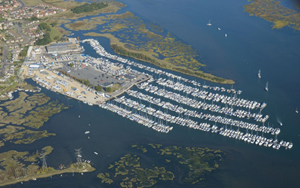 In the summer of 1991, Tony Hackett sat on his Yacht “Bold Lancer” surveying the Cobbs Quay Marina as it was then and he was alarmed at the way it looked! The berths at low tide were full of mud, causing the boats to lie at odd angles and making access difficult for the owners.

Tony discussed the situation with other Berth Holders over a drink in the Yacht Club. By the end of the conversation the Berth Holders Association had been born. The original board members included Tony, Bob Maidment and Eric Hall. The initial purpose of the B.H.A was to represent all the berth holders in a united voice over day to day running of the Cobbs Quay Marina.

The first challenge was to address the dredging of the marina and access channel. The profile of the problem was raised with the help of the boating press and after photographic evidence was published in a Yachting Magazine and the marina owners took the necessary action.

At the end of 1993, the second full season, the B.H.A had swelled to 100 members due to it’s success with the dredging campaign.

In 1994 with the majority of the dredging work completed, The B.H.A established a social side after a successful group cruise. This led to the ever popular “cruising calendar” and “cruising in company”.

With the cruising calendar’s success came the growth of the B.H.A. and by the end of 1996 membership had jumped to 219.

Other involements of the association have been the car parking improvements, the new shower block and input & influence over the workings of the Poole twin bridge system.

By 2010 well over 600 skippers had paid subscription fees and were enjoying the benefits of their one-off membership fee.

Today the objectives of CQBHA have much the same purpose in bringing people together to have a better experience of their berthing at the marina and cruising from Cobbs Quay and Davis’s Boatyard.